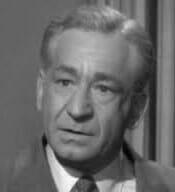 Art Smith, 1899-1973, played Harry Carlyle, the ‘labor spy’ of the Labor Spy, segment of Native Land, 1942, who is turned against his comrades in the union local. One of the original members of the group theatre, Smith originated leading roles in plays by Clifford Odets and others, before moving to Hollywood in the 1940’s. Blacklisted between 1952 and 1960, Smith was named as a former Communist, before the House Committee on UnAmerican Activities, by Elia Kazan.